We’re hiring a Land Matcher for the Vancouver Is

If you need a cheery vegetable person on this Tues

Farmers for Climate Solutions has released their A

You’re invited to an outdoor Farm Social at Road

For current farmers who value the community they’ve built on their land, the thought of selling the farm may be out of question. Turning a farm business into a co-operative, especially one that will eventually own the land, can be a way to formalize the community approach to farming and ensure the land will be available for future generations of farmers. This is a story about how co-operative structures can provide a long-term sustainable solution to transition.

This story begins in the 1970’s with a group of folks active in the “back to the land” movement. They were motivated to simplify their lives and through doing so, develop a deeper and more respectful relationship with the earth. They operated under a non-profit called C.E.E.D.S. (Community Enhancement and Economic Development Society) and were farming and homesteading communally on various properties for a number of years before arriving at “Betty’s Place.”

Betty’s Place, now Horse Lake Community Farm Co-operative, is 133 acres of hay fields, pasture, gardens and riparian area lakefront. It is in the Tsq’escen (Canim Lake Band) Traditional territory of the Northern Secwepemc te Qelmucw, near the town of 100 Mile House in the South Cariboo region of B.C.

The farmers of C.E.E.D.S. tended the land, built gardens and raised livestock, developed infrastructure and formed relationships with neighbours and community members, all of which were integral to their goals of self-sufficiency and regional food security.

When Betty, the landowner, retired, the land went up for sale. C.E.E.D.S. had a long-term lease with the right of first refusal, but the land was valued at $400,000 and CEED’s did not have enough capital to purchase it outright. They also weren’t particularly interested in being status quo landowners, as they have always valued stewardship and love of the land over private property. This is when the idea of forming a co-operative of community members emerged.

“There was concern in the community about the loss of this unique gem, because of its history, natural areas, and, most importantly, its agricultural productivity. Betty Johnson, the owner, was willing to work with C.E.E.D.S., community members and The Land Conservancy (TLC) to transition the land to a new co-operative. There was, and still is, a lot of community support for this project, and without that community support, the co-op would have had a very difficult time getting off the ground,” explains one member.

The basic idea was to sell shares in the co-op at $5,000 per share, and raise money for the co-op to buy the land and donate it to TLC. The Horse Lake Community Farm Co-operative was incorporated in August 2006 with the objective of protecting the agricultural and ecological integrity of a vital lakeshore acreage. Due to changes at TLC, in the end the co-op, rather than TLC, had to own the land. TLC provided technical support for the formation of the co-op. The community members chose a co-operative model because it provided secure land access for farmers, allowed the members to purchase a property of this size and cost, and, above all, “promoted a vision of community land ownership and usage.”

Purchasing a share in the co-op allows community members to participate in farm activities and have preferential access to food produced by the co-op. Members also have the option to access land for growing their own food and can run for election as a co-op director. Every member has one vote in major decisions, with a broad base of input into decisions. It also provides the intangible but invaluable knowledge that participation will strengthen the community’s food security. Says one member, “What would you rather have, one or two percent return on your money, or the knowledge that when your children and grandchildren are grown, they will still have access to good, high-quality, locally-produced food?”

Because of this mentality, many people were happy to support this meaningful project, including family, friends and local businesses. Initially, they sold 40 shares and raised enough money to cover 50% of the cost of the land. The balance came from a generous interest-free loan from a co-op member.

C.E.E.D.S. became a lease holder on the land and pays monthly rent to the Horse Lake Community Farm Co-op. Other farmers on the land also pay a lease rate, which they renegotiate yearly. They also do fundraising activities, such as sponsoring the local Seedy Saturday, hosting educational workshops, garage sales, retreats, and many other community events. They have sold another 20 shares over the years. 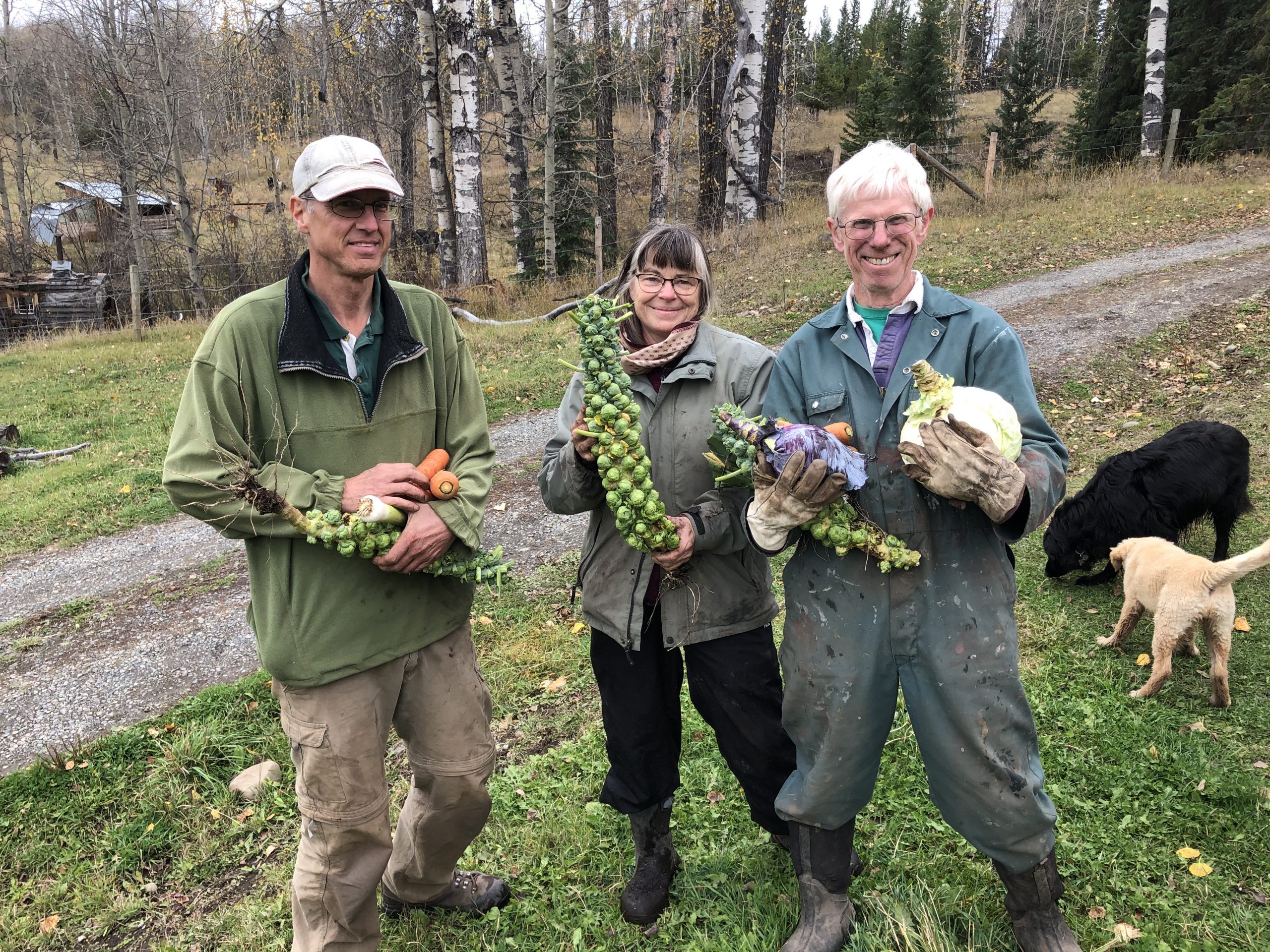 In this way they were able to make sporadic payments to their understanding lender. In 2019 the co-op still owed a significant sum but their lender felt, without pressure, that the co-op was in a position to settle accounts. The co-op board again appealed to their membership. Two members came forward to take on most of the remaining debt, and no-interest loan agreements were drawn up. The co-op pays three quarters of the money they receive each month through lease fees and fundraising towards the debt, which will be paid off by 2029. Remaining revenue goes to expenses such as liability insurance, property taxes, water rights and shared infrastructure improvements.

Things continue to evolve at the Horse Lake Community Farm, as some of the members are aging and looking towards the future. They want to see the land continue to be farmed and are looking to get more co-op members actively engaged in food production on the land. One co-op member wanted to get into raising cattle, so C.E.E.D.S. sold him some of their cows. He started building up his herd and he now holds the lease for the pasture land.

Dave, who started off as a guest and WWOOFer, kept coming back to the farm because he loved the land and shared the values of the members. He bought into the co-op and made a proposal to lease half the cultivated vegetable production area. He now lives and farms on the property, selling his produce in 100 Mile House.

The legacy they are most proud of is that they have shown a lot of people how to grow. Over half their members now grow their own food. Starting the new co-op was a leap of faith, but since arriving on the land they had always placed people and relationships first. To those interested in this path they say: “establish yourself with your neighbours. Despite being a bunch of radicals, we always worked with everybody. We depended on our neighbours and couldn’t have survived without them.” 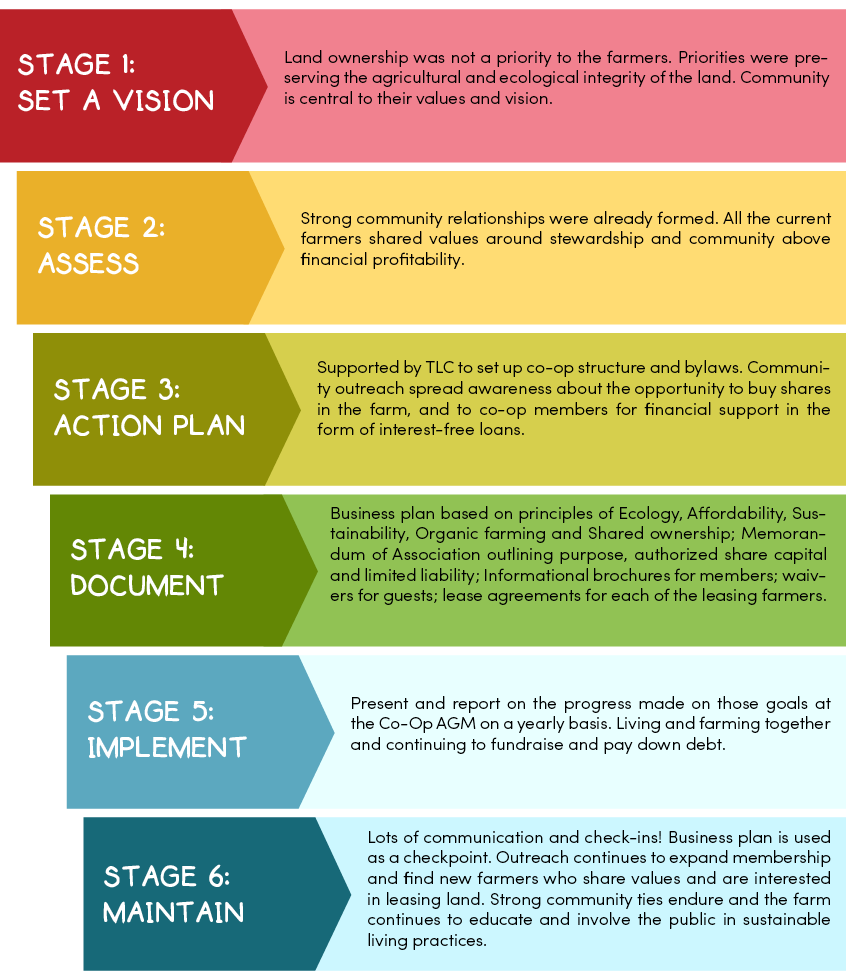