The Apprentices have landed!! 👩‍🌾 We’re

@legacygrowerscollective is looking to borrow a ro

Stellar new greenhouse built by youth in the Indig

Jodi and Moira of @fork_in_the_rowed are two farme

Nature’s jewels ✨ 📸: @frijolatorio. They a

Qualifying for a mortgage in order to purchase land for farming through a traditional lending institution can be a daunting barrier to many new farmers. This is a story about how two generations of farmers can work together to transfer land through creative financing solutions.

Claremont Ranch Organics is a 7.75-acre mixed-fruit organic orchard located in Lake Country, B.C. Bob McCoubrey, who had wanted to farm since university, bought the farm in 1974 with his wife Sharon. He became discouraged with conventional agriculture, as he began to see the impact of chemical use on the environment, as well as on himself and his family. He transitioned the farm to organic in 1989 and began selling his fruit direct to customers and when Kelowna-based organic produce distributor Urban Harvest opened, Bob began to supply their box program.

Bob had a vision for farm transition that included keeping the land in organic production and he knew that it was time to start thinking about it more in depth when his body told him it was time to start slowing down – as he put it, “Too many days with sore shoulders!”

As in all good stories, this one has many elements of synchronicity. Molly Thurston had recently moved home to the Okanagan with her husband Matt, both of whom had graduated with Bachelor of Science degrees in Agriculture. In 2015, Molly took a job with the Central Okanagan Community Garden Society, where Bob had been volunteering his knowledge and time. They worked together that year and connected over mutual interests. They developed a friendship and mentorship, while discovering they shared values, worked efficiently together and communicated well.

Matt and Molly had been actively looking for a way to get into agriculture and had been looking all the way across Canada for the right fit. They loved that farming is a challenging and creative enterprise where farmers are always learning and adapting to changes in the market and climate. When Bob suggested they come live in the cabin on his farm in 2006 to try co-farming, it seemed like an excellent opportunity. That first year was a huge learning curve, with lots of ups and downs. Bob was an amazing and patient teacher, as he began sharing his expertise in the field.

From 2008-2010, Matt and Molly ran a small-scale vegetable operation on some vacant land at Bob’s farm, while continuing to apprentice under Bob in the orchard. During this “co-farming” period, each business ran separately and no cash was exchanged, but they shared labour, enjoyed helping each other out during busy times and co-marketed their crops. Both parties describe this time as instrumental for the transition, as it allowed them time to gain trust in each other, while working together to develop solid communication.

Bob and Sharon felt strongly that the best outcome for their land would be to have it continue to be organically farmed. They have two children who have always loved the farm and consider it a special place, but neither were interested in farming as a career. When considering their needs for retirement, one important note was that Sharon had a pension from her career at a university, so they weren’t counting on the transition to provide all the funds for their retirement. They also agreed that their kids will make their own way in the world, and when Bob and Sharon are gone, they will get what’s left, so they weren’t trying to calculate a large inheritance into the equation. However, they were sure that they wanted to stay in the Okanagan, which is an expensive real estate market.

In 2010 they began discussing the transition of both the land and the business. Both parties agreed that Bob and Sharon should be paid a fair price for the land in order to get the return on their investment that they deserved, so the first step was to have the land assessed. At that point Bob and Sharon had fully paid out their mortgage. Based on Matt’s experience in agriculture lending and his connections with Farm Credit Canada, they agreed on a value of 1 million dollars, which included the land, the two homes on the land, outbuildings, machinery and all assets to do with the orchard business, including customer relationships.

Molly and Matt went to Farm Credit Canada and received financing for 30% of the land cost, which they paid to Bob and Sharon. Bob and Sharon then took out a second mortgage which they offered to Matt and Molly at 4% interest over 10 years, so they could purchase the farm in full.

Everyone agreed that for 4 years, Bob and Sharon would continue living in the home on the farm, in exchange for the interest on the $700,000, so for 4 years there would be no cash exchanged for the second mortgage. Bob’s mother, who was also happily living on the farm in the secondary home, was also considered, and the deal provided that she could also stay. However, life is always changing and 6 months after the sale, Bob and Sharon found the perfect home to retire in and they decided to move off the farm (Bob’s mother stayed). At that point, Matt and Molly moved into the main farmhouse and began paying the 4% interest, as well as paying down the principle in good crop years.

It took six months from the time of the first serious conversation about the farm sale until the time the sales agreement was finalized. During this time, the 5 years of co-farming and relationship building really paid off. It was important for everyone to be able to sit down and have very frank and open discussions about worst case scenarios like divorce or death or farm failure, but they weren’t afraid to broach these uncomfortable topics because of the trust and comfort level they had established.

The intention was for Bob and Sharon to hold the mortgage for 10 years, so one of the unlikely, but worth-considering scenarios that came up with was… what if Bob and Sharon were to pass away during those 10 years? What if either of the new farmers were to pass away during that time? Matt and Molly sought out solutions through researching life insurance policies. They considered taking out a life insurance policy on Bob and Sharon, which would allow them to pay off the rest of the land in the event of their deaths, a solution that we’ve heard other folks turning to as well. Ultimately, Matt and Molly decided to take out life insurance on themselves to be sure that they would be able to cover all of their debts to an amount of $1.3 million if something happened to either of them.

There was risk involved  for Bob and Sharon, as well, in holding the mortgage in the way that they did, so the intention was always to pay them back as soon as possible. Thanks in part to their off-farm incomes, Matt and Molly paid Bob and Sharon back by getting the loan down to the point where they could return to FCC and have the remainder of the mortgage financed by the lender. They repaid their loan to the McCoubrey’s in 2017, four years earlier than the agreed upon target date for repayment. They still carry a mortgage with FCC, but what Bob and Sharon did by taking a chance on them allowed farm ownership to become possible for them.

There were plenty of hurdles and fears to overcome, but these farmers were persistent and continued to believe in one another and the value of the future they were co-creating. Bob described coming to a place in his thought process around the idea of backing the mortgage for the new farmers and thinking about how he wanted to invest his money, where he realized they needed to think outside the box. What was he going to do if he did receive the full value for his land right away? Invest in the stock market? In his own words, he’d “never been a stock market kind of guy.” His decision to invest in the new generation was aligned with his values.

Looking back, he says the solution was really quite obvious, but it took a lot of courage to do things a differently, especially when everyone was reminding them of all the risks!

Trust and perseverance seem to be the cornerstones of success in the making of this transition and it has indeed been very successful. Reflecting on the decision to go through this unique process, both parties agree that it has brought new possibilities into their futures and are now fully enjoying the fruits of their labour. 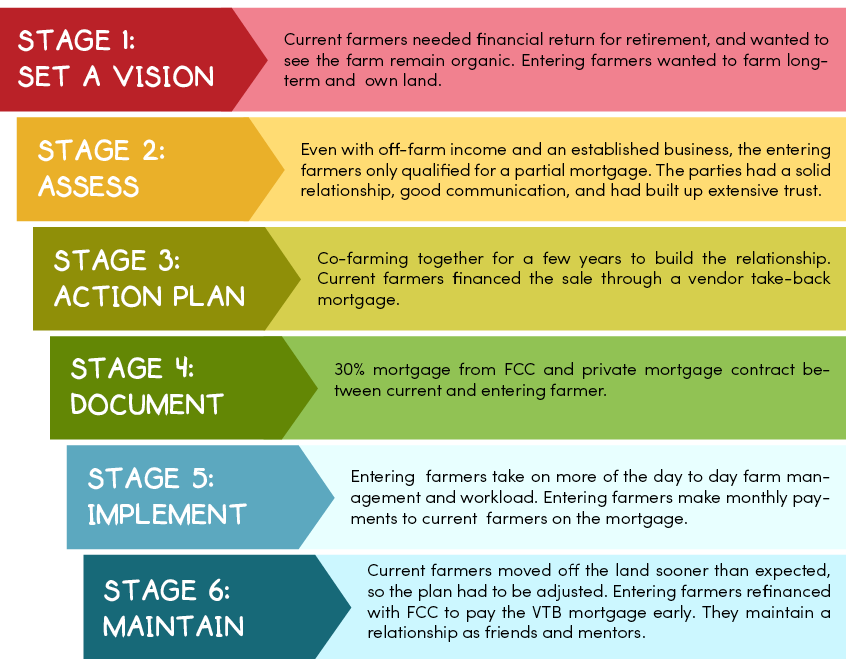