Abundance 💫 @abundance.community.farm is a nove

This Saturday! You’re invited to a socially-dist

The Canadian Federal Election is coming up on Mond

You’re invited to a Farm Tour at Bent Plow Farm

Our next Business Bootcamp starts in early October

This Weekend! You’re invited to an online worksh

Take a look at a topographical map of the Shuswap…you’ll probably notice a large number of lakes, long ranges of undulating hills and mountains. Look closer on Google earth and you may even notice a large conglomeration of houseboats puttering up Seymour Arm, perhaps a long line of cars hemmed in behind one of a thousand RVs on the Trans Canada.  Venture a little ways off Highway 1 however and you’ll find some rich farming belts tucked up against the hills and weaving on the bottoms of our tranquil river valleys.  The soil is heavy but rich.  The wet springs, hot dry summers and relatively frost free autumns make for ideal growing, both for vegetables, livestock and dairy.   An agricultural region in BC certainly worth preserving, happily the Columbia Shuswap Regional District (CSRD) agrees.  It’s always heartening when a governing body or municipality takes an interest in its own agriculture development. 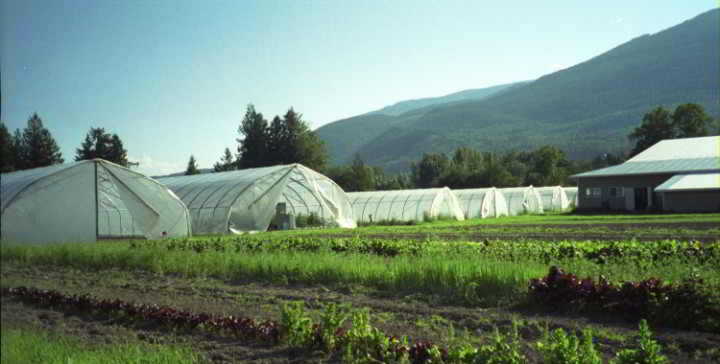 In the past year the CSRD was approved funding to create an agricultural strategy for the region with a focus on sustainability.  Yes, sustainability…blanket terminology to be sure.  However most of us farmers and environmental advocates are fairly tickled to hear the words “Shuswap” and “sustainability” even used in the same sentence by a governing body.

The Shuswap Agriculture Strategy is currently being drafted with a heavy input from members of the local communities, farmers and folks alike.

The project is steered by a committee made up of a mixed basket of local farmers (both small scale organic and large scale conventional) and a handful of CSRD representatives.  The amount of public engagement alongside the evolution of this project has been most impressive.  Starting with an open house in Salmon Arm last fall and recently hosting a number of focus groups within the region, the strategy is drawing much of its direction from public interaction.

The first open house last autumn I’d liken to a highschool dance.  Large scale dairy farmers and regular folk on one side of the room, small scale organic farmers and environmentalists on the other.  Eventually however the clean shaven and well scrubbed farmers came together with the hairier and somewhat dirtier.  Groups were formed, unspoken ceasefires declared.  A group mapping exercise to plot out every and any agricultural asset in the region was carried out; citizens were also encouraged during the meeting to express their opinions on the challenges and potential opportunities of Shuswapian agricultural issues.  This was September, 2013. 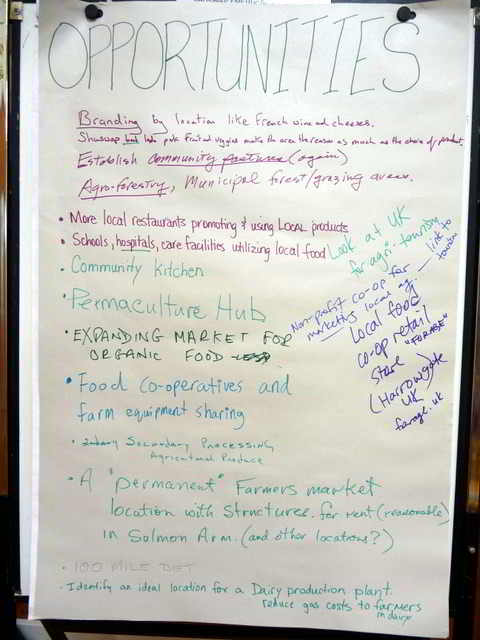 Most of us went back to our farms, pulled our roots out of the ground and tucked in for the winter.

This February, with two feet of snow still on the ground, a number of farmers managed to quit their repose and make it out to the next round of focus groups hosted at 5 locations throughout the Shuswap.  These meetings started out a little easier then the first round, we’d done this before…just cross the floor and ask for a dance.

Most of what came out of these focus groups from the public was elating, things you wouldn’t necessarily believe a lot of people from different backgrounds could agree upon.  Common themes, visions and strategies that were pulled out during the group brainstorming sessions included:

The main elements of the meetings are still being hashed out and refined by the steering committee, however a brief overview of the outcomes of the meetings as well as a some good background to this project is posted on the Grow Shuswap website.

A Shuswap Agricultural Strategy release party is in the works for early April, the public will have a chance to review the strategy, make further suggestions and begin the process of pulling together as a community of agrarians to bring the plan to maturity.