📣 GIVEAWAY ALERT! 🎉 We will be giving away 3

Join us at the Columbia Basin Mixer today at 7pm P

Join us at the Columbia Basin Mixer today at 5pm P

Love this salad bubbler from @nobuhiko_yoshimune.

“From the time that I was a little girl, I knew that I wanted to be a farmer,” recalls Mary Lundgard from her family’s home, just outside Grimshaw, Alberta. As she talks, she minces a clove of garlic – locally grown by her daughter, Lisa – and adds it to the mushroom soup simmering on the stovetop.

Born and raised in the eastern Maritimes of Canada, Lundgard was a town girl with the dream to grow and raise her own food. “My mom grew up on a farm in Nova Scotia,” Mary remembers, “She always said, ‘Oh no, you don’t want to do that!’ My family used to tease me about this childhood dream. But later in life, I moved to Alberta, met my husband, Peter, and we began to farm. Finally, I could write home to my family and tell them, well, I’m now a farmer.”

Over the past several decades, Mary and Peter have managed small seed and livestock operations in northern Alberta. In 2005, they moved their family from Fairview to 600-acres of land southwest of Grimshaw, where they started Nature’s Way Farm, a certified organic farm, producing pasture-fed beef, sheep, lamb, and pork. “We’re trying to farm a sustainable way,” says Mary, explaining that they don’t use any chemicals for pest-control, or fertilizers for field production. 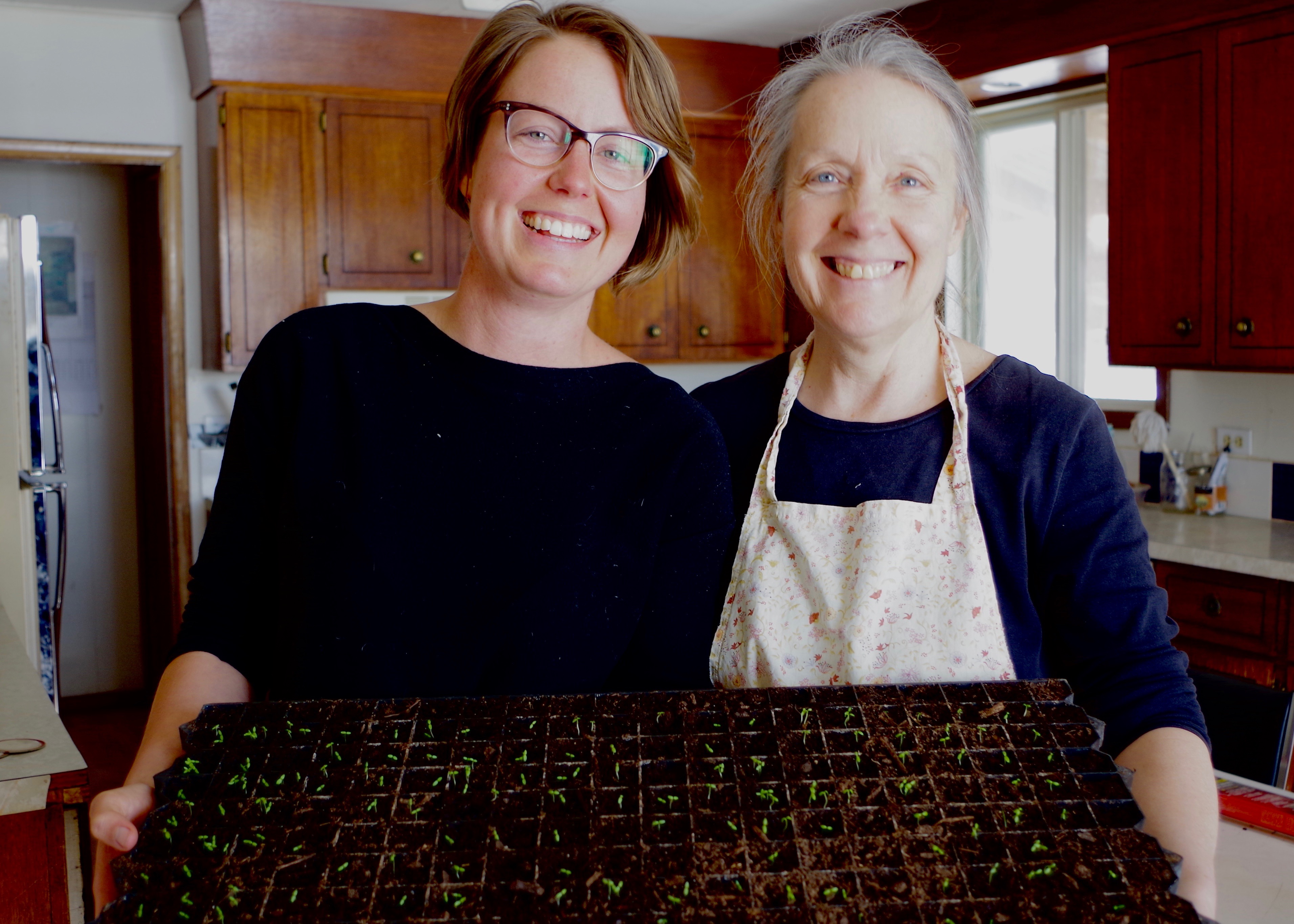 Nature’s Way’s holistic approach to growing and raising food is well-known in the Peace Country. Every year, the farm receives dozens of aspiring farmers from all over the world who come to intern and learn, hands-on, about organic agriculture. But what also makes Nature’s Way unique – and what many people might not realize – is that many aspects of the farm are managed with a woman’s touch. “I’m not just the wife, I’m not just the worker,” says Mary, smiling. “I’m actually a farmer.”

And she isn’t alone. There are two generations of women who are a part of Nature’s Way Farm: Mary, her daughter, Lisa Lundgard, and Lilli Klamke, who joined the farm full-time in October 2014. Together, the women work in all areas of the farm management – from strategic decision making to hands-on labour to driving the tractors to animal husbandry.

Women have always played important roles on farms throughout Canadian history, although they haven’t always been identified by society as ‘farmers’, but rather the ‘farmer’s wife’. Mary admits that it wasn’t until the late 1990s when she took a course in holistic management – an in-depth process for decision making – that she felt empowered to call herself a farmer. She recalls that when she first started, years ago, she’d be petrified to walk through a field of cows. But today, it’s her favourite place to be. “Any day, if I had the choice, I’d be working with the animals,” she says. “They are so intelligent and have such amazing personalities. There’s so much to watch and learn from them.” 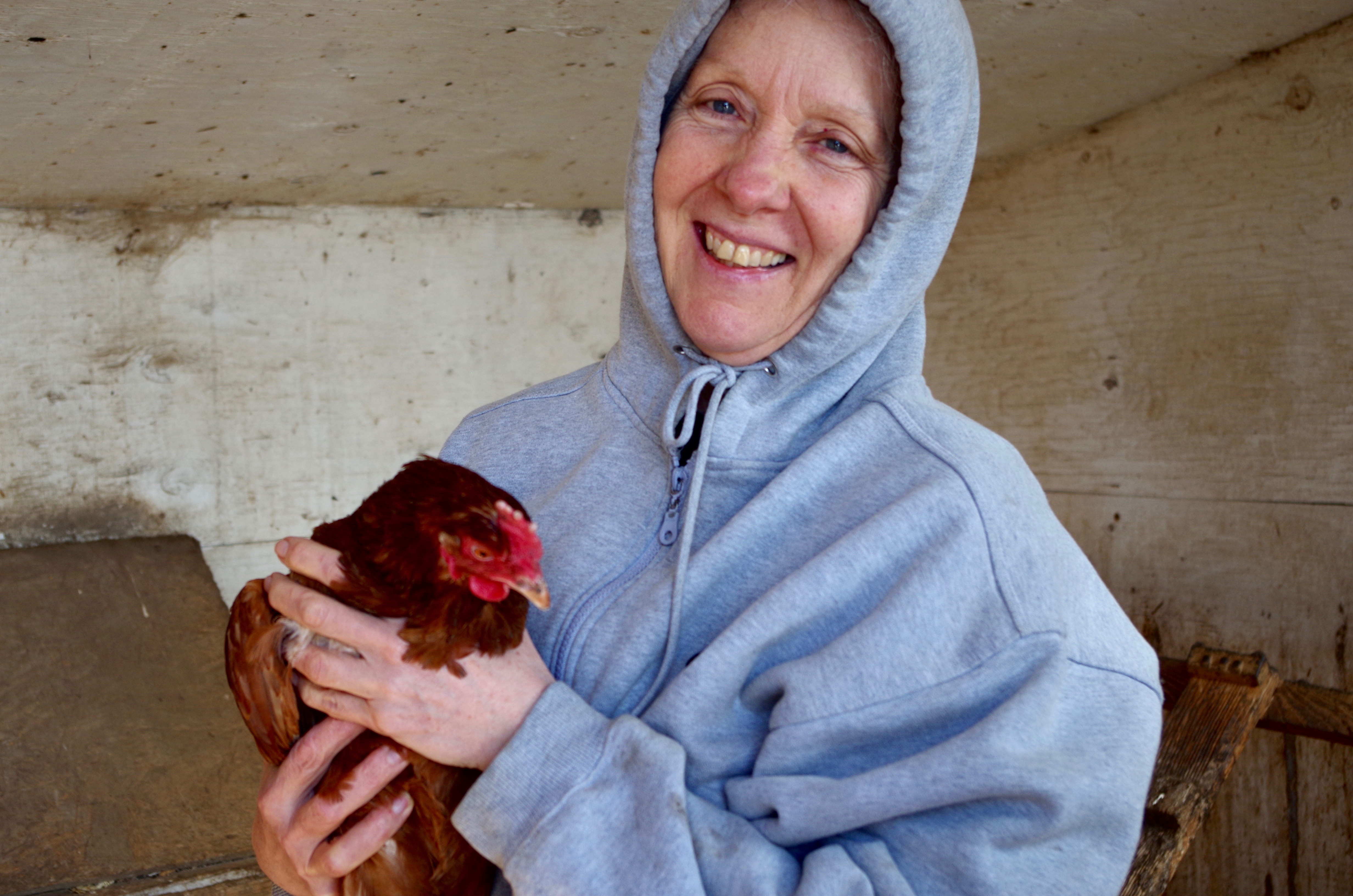 Lisa Lundgard, 28 years old, has fond memories of working alongside her mother, Mary, weeding the vegetable gardens, milking the dairy cow, and taking care of the chickens. Initially, Lisa never thought she’d grow food for a living. At university, Lisa studied biology and considered becoming a doctor. But the more she learned about global food insecurity and food politics, Lisa realized she could make a positive impact as a farmer. Back on the farm, Lisa started a Community Supported Agriculture (CSA) enterprise called the Veggie Patch, growing organic vegetables for people in the Peace Country.

“My favourite quote is ‘food is medicine,’” says Lisa. “We need to be thinking about what is it that we’re eating and putting into our bodies. That’s where my passion comes from. I wanted to be able to grow food for myself and my community.” 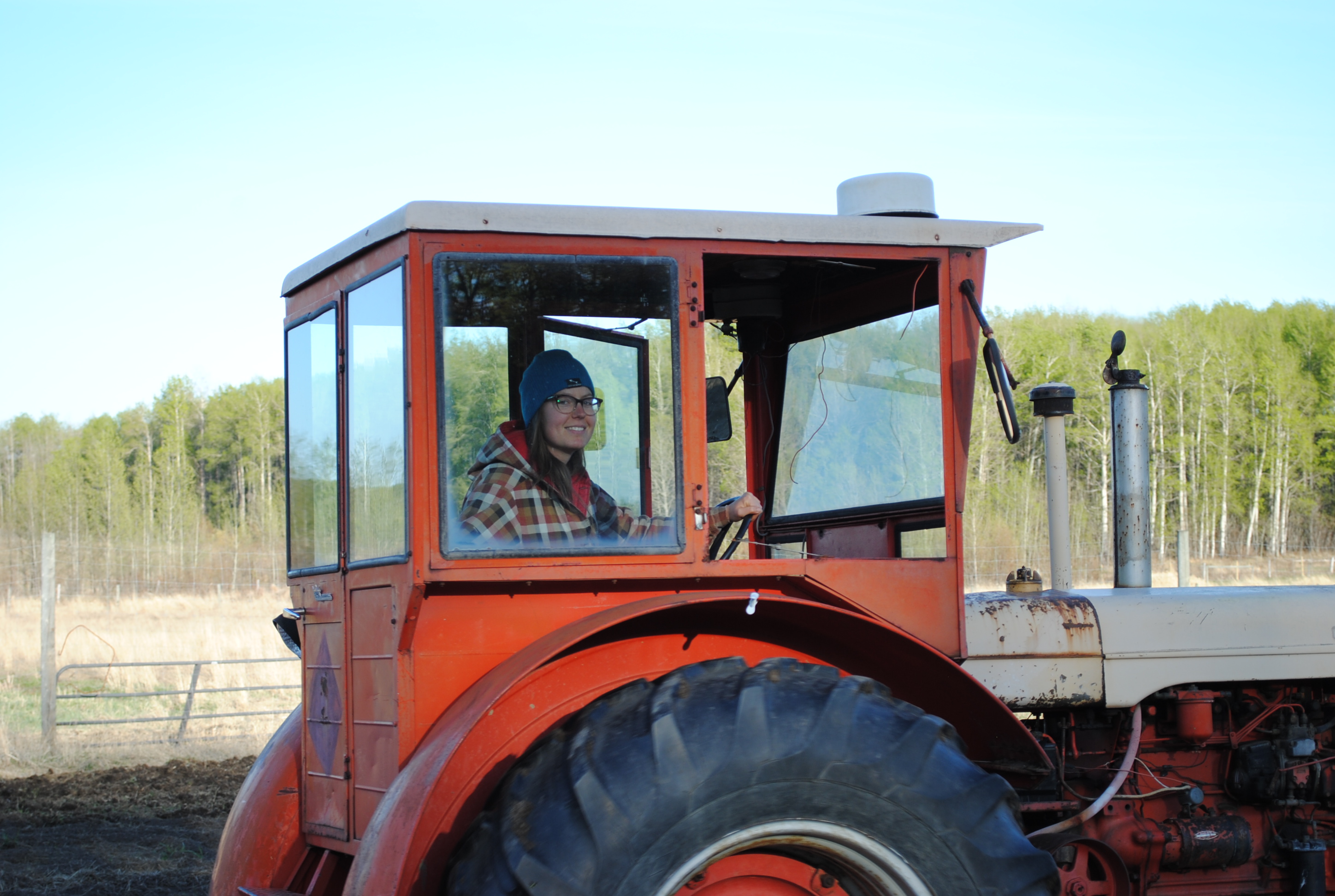 But the farming learning curve has been steep, admits Lisa. “When I came back from university, there were so many skills I had to learn,” she says. “Even though I grew up on the farm, I didn’t have a lot of skills my brother would’ve had. For example, I had to learn how to drive the tractor, make hay bales from start to finish, work with the cows, and get out there to help pull calves.” Today, Lisa is applying this knowledge to co-managing The Homestead, a new small, organic farming venture located near Goodfare, Alberta. She and her partner, Donovan Kitt, sell their organic produce and eggs at the farmer’s market in Grande Prairie.

Lilli Klamke, 27 years old, is the newest farmer to dig in at Nature’s Way Farm. In 2013, she first traveled from her home country, Germany, to the Peace Country to work on the farm and complete credits for her agricultural degree back home. Klamke first became interested in farming by traveling to New Zealand and working on a variety of organic farms. In Canada, her work ethic and passion for agriculture impressed the Lundgard family, who ended up offering her a full-time position on the farm. 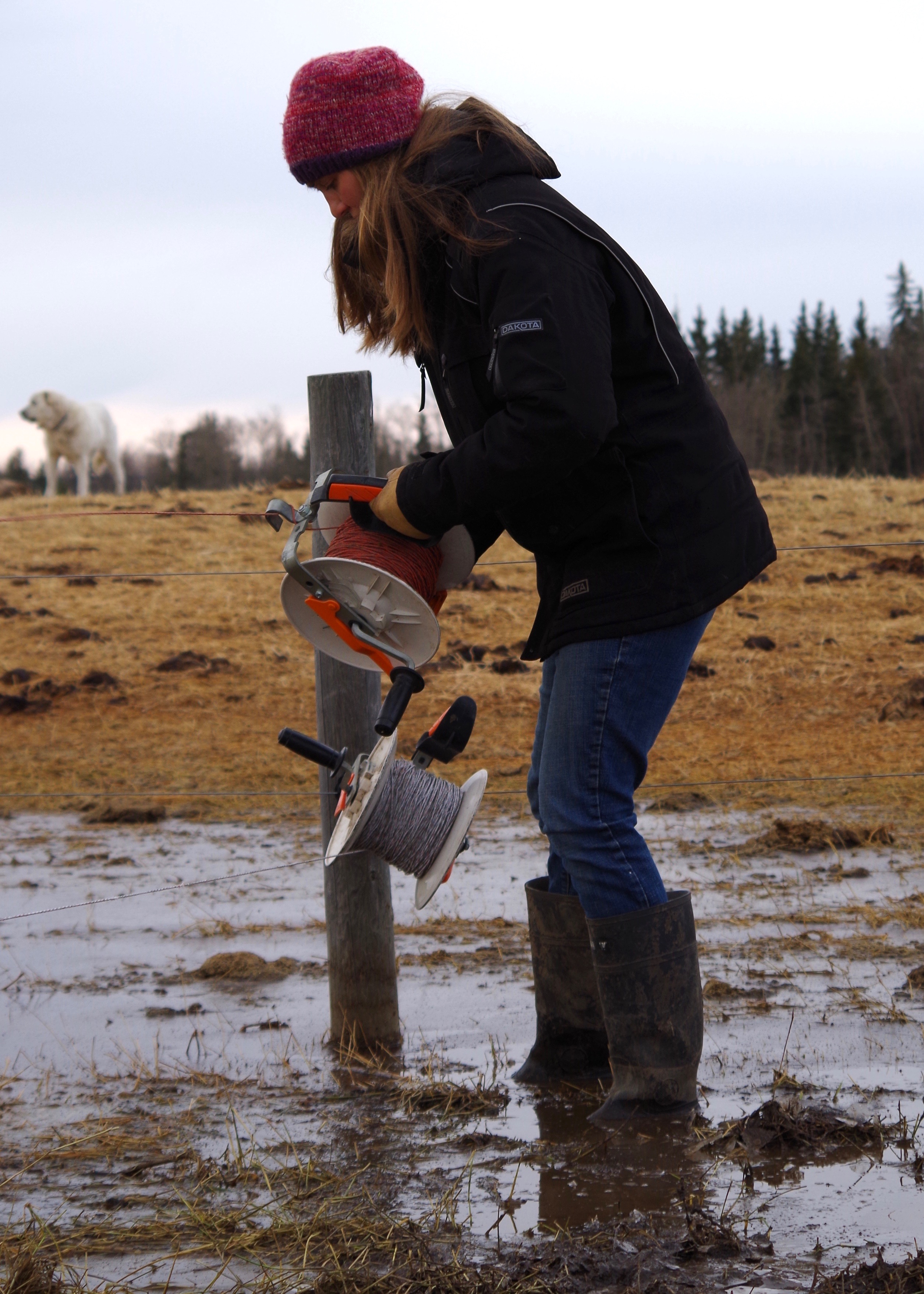 “She’s a powerhouse,” laughs Lisa. “Lilli came with the energy and will to drive machinery.” Klamke thrives on the challenges that farming entails. “The long hours, the hard work outside, and that you can always see what you’ve accomplished at the end of the day – I really enjoy that,” she says. “The Peace Country is a beautiful area to be farming. I love that farming is a family business.”

In North America, Lisa and Lilli are amongst the growing trend of young women – from rural and urban communities, alike – trying to gain the skills they need to become farmers. Mary says she’s inspired by the younger women at Nature’s Way and the overall gender-culture shift that’s happening in North America.

“It’s amazing to watch Lisa and Lilli learning and gaining independence. They’re determined to get out there, fix machinery when it breaks down, and become more rounded as farmers.”

Both Lisa and Lilli encourage other women interested in farming to take up the challenge of growing food. “Every day you’ll face new challenges,” says Lilli. “It takes time, but at some point, you’ll gain confidence in your abilities. Throw yourself at the challenge! You’ll learn so much about yourself.” Lisa believes that networking with other aspiring farmers and the older generation of farmers is key to success.

Today, she and Lilli are both members of the Young Agrarians, an organization that provides networking opportunities and resources for young farmers in Alberta. “Young farmers are powering each other up to say ‘we have to farm, make money, and make this a viable business so we can have a family’. Go forth with growing food, but also the ideal that you’re going to make money.”

Text and photographs by Trina Moyles, author of Women Who Dig: Farming, Feminism, and the Fight to Feed the World (University of Regina Press) – COMING SOON!

(Article and photos originally published in Move Up Magazine in April/May 2017).